I’m happy to say, dear Reader, that after a five-year hiatus, I have resumed revising and sending out poems! The first fruit of those labors is my poem We Begin at the End in the latest issue of a new journal called Gleam. This journal is completely dedicated to a new form they’re calling the cadralor. It’s an interesting and expansive form, focused on images and intuitive structure instead of meter or anything you can count, other than the required five stanzas. Last night I had the pleasure of hearing many of the poets in the issue read their work, as well as reading mine to them.

A poetry reading on Zoom is an odd yet oddly beautiful experience. The one I attended last night included people from at least three U.S. time zones and someone from the U.K. There were no audible sighs from the audience after particularly affecting lines, like we would have heard if we were all in a room together — but instead, people quoted those lines in the chat, or made other comments about what spoke to them in each poet’s work.

I owe thanks for the discovery of this new journal and poetic form to the poet Kris Ringman, whose gorgeous poem, When I am dead, will you make runes with my body? was in Gleam’s inaugural issue. You can also see and/or listen to her reading it on YouTube.

In early drafts, my poem was an ekphrastic work based on the 10 cards in the Gaian Tarot. Poet and tarot reader Carolyn Cushing had shared that 10s in the tarot can symbolize what comes after a culmination, the end that slides into a beginning again. For a while, I revised and reworked it as a four-stanza poem, but to make it into a cadralor, I added another stanza based on a 10 from a different deck. This is the third stanza that comes in the middle, where the poem transitions from an act of learning and mourning to a growing sense of obligation and connection. Taking on the challenge of writing a cadralor, which pushed me to add a fifth stanza, was key to this poem finally coming together.

Posted by Kat Good-Schiff at 12:02 PM No comments:

Roofers ride their ship of shingles
through the ocean of day.
Rock music and radio ads cut their way
at the prow, as a chorus of hammers
shimmers in their wake.
Old tiles crash off the sides.
A reversing truck alights with an exhale
of brakes. The sun is a tyrant.
The breeze, when it rises
is a sip of fresh water. 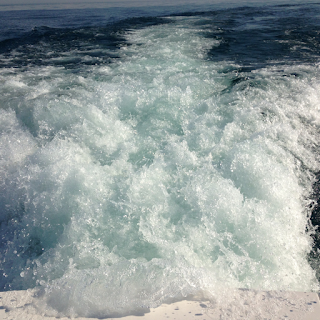 I wrote this poem-sketch last summer, while sitting in my yard and listening to roofers work on a house nearby. Aware of how comfortable I was in that moment compared to them, I thought about how loud music like what they were playing can be helpful when you’re doing something that, no matter what, just has to get done. Seeing them walk along the roofline reminded me for some reason of the boat-shaped play structure my childhood friend’s grandfather built for us a long time ago. I wasn’t close enough to take a picture, so here’s a stock image of a boat’s wake instead.
Posted by Kat Good-Schiff at 11:58 AM No comments: 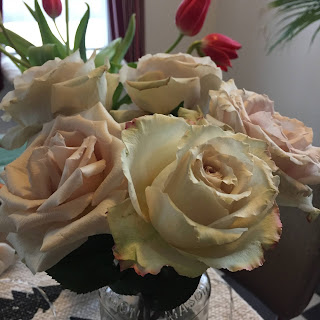 Since we're spending so much time at home these days due to Covid, I've been putting extra effort into making it a nice place, including buying flowers for the kitchen table every week. And it's important to remember the people who grew, picked, and packaged them.
Posted by Kat Good-Schiff at 10:11 AM No comments:

Each egg is a gift
Pushed out with pain
And squawking
I dress them up
With salt and cheese
Savor each soft bite
The shells are red, tan
Coral, cream
Even blue
Together, they pass
The life they might have had
To me
A little detour
On their way
To something new 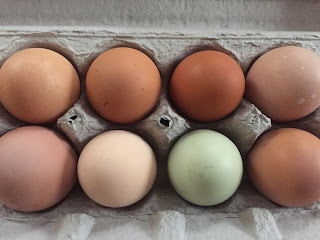 I get these chicken eggs at Big E's supermarket in Easthampton, MA. They're from Cold Spring Ranch in Southampton, MA and a sticker on the carton calls them "happy hillbilly eggs." They're delicious and, as you can see, beautiful. The different colors remind me that each one came from an individual.
Posted by Kat Good-Schiff at 9:52 AM No comments:

Reading poetry is something I love and have done for decades, but sometimes it still intimidates me, either because I’m in awe of the poet’s skill or I’m frightened by the depths of emotions the words take me to.

That’s why I loved discovering #theSealeychallenge last year and why I’m doing it again this year. Reading a poetry book a day for a month (or 100 pages a day, or however close I could come to that) was so freeing! At first I approached it like a task to do well, but I soon realized the only way I could do it was to let go of how I normally read (slowly, carefully, thoughtfully) and just go for it. Let the words flow over my eyeballs, my brain, my heart. Devour the words like popcorn, instead of eating them gingerly like petites fours.

I discovered some poets whose work amazed and excited me. I slogged through some who just didn’t do it for me. But the best gift I got from the experience was gorging on words, trusting that they were changing me even as I let them go, like racing down a highway with the windows open, poems written all over the land.

Posted by Kat Good-Schiff at 7:59 AM No comments: 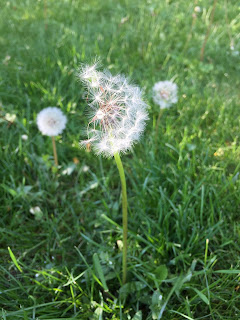 I wrote this poem-sketch while sitting outside in early spring, one of those days when warmth feels new and precious. Each being is on its own schedule, all of us overlapping and interlocking like a great tapestry of life and death. One of my grandmothers had a head of white, curly hair that shone like a halo when she visited me in a dream.
Posted by Kat Good-Schiff at 9:03 AM No comments:

It started before Eve
Was framed, exiled beyond
The first of many walls

No one talks now
but trucks and sparrows 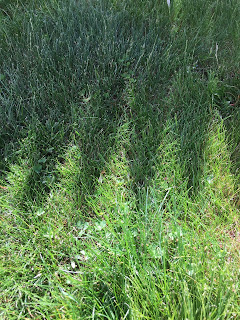 This poem started as notes that I jotted down while drinking my tea outside one morning in the middle of May. I had slept later than I normally do, and I noticed how much stronger the sunlight was, plus how much quieter were the local animals. Instead of peaceful and warm, sitting in the sun at that point was unpleasant and hot! The experience reminded me of this little poem by Valerie Worth and also got me thinking about how power and goodness are relative and contextual. (The link to Worth’s poem is from a tribute in No Water River.) The image shows the fence shadow I was looking at.
Posted by Kat Good-Schiff at 12:26 PM No comments: